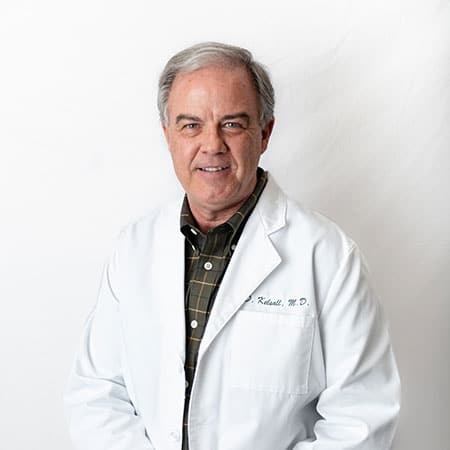 David C. Kelsall, M.D., is co-owner and Medical Director of the Rocky Mountain Ear Center. Dr. Kelsall is an honors graduate of Stanford University and earned his medical degree at the University of Colorado. After serving residencies in general surgery at St. Joseph Hospital in Denver and in Otolaryngology at the University of Colorado Health Sciences Center, he completed his fellowship training in Otology and Neurotology at the Denver Ear Institute.

Dr. Kelsall is board certified in Otolaryngology, a Fellow in the American Academy of Otolaryngology/Head and Neck Surgery, a member of the American Neurotology Society, and the Colorado Medical Society. He is also a board member for the American Cochlear Implant Alliance (ACIA) and the Listen Foundation.

As a researcher, Dr. Kelsall has played a role in clinical trials leading to the FDA approval of current cochlear implants on the market and is active in many research projects related to hearing loss and cochlear implants. As a Medical Director of the former CNI Center for Hearing, he led a team of volunteer physicians on annual missions to third world countries, where they perform surgeries, provide hearing aids, and train local physicians. In 2001, Dr. Kelsall established the annual CNI Cochlear Kids Camps, now called The Listen Foundation Cochlear Implant Family Camp. Dr. Kelsall is a frequent lecturer and has published numerous articles in professional journals. Third-generation natives of Colorado, he and his wife Tammie have three children.

Dr. Kelsall is also involved in the Englewood community. He is a board member for the American Cochlear Implant Alliance and the Listen Foundation.

If you are experiencing a medical emergency, please call 911.

Complete the form below if you would like to schedule an appointment with an audiologist. Patients must have a hearing diagnosis and referral from an outside practitioner to see one of our physicians.